Conax Technologies’ Type K Thermocouples and Multi-Hole Ceramic (MHC) Seal Fittings could be seen in action on an episode of the PBS program NOVA, which aired February 20, 2019. The episode focused on the science behind early detection of volcanic explosions, specifically the measures being taken to detect the next eruption of Campi Flegrei in Italy.

The Conax type K thermocouples and MHC seal fittings were used in the inspection of the caprock, which is found beneath the earth’s surface in Naples, Italy, where Campi Flegrei resides dormant. The Conax products assisted experts in testing the strength of the caprock.

When further inspected under a microscope, the caprock was found to have formed an intertwined network of fibers which is key to the caprock’s strength. Scientists believe that it was the increased strength provided by the fibers that kept Campi Flegrei from erupting in the 1980s.

In addition to testing the caprock, scientists in Naples have implemented additional sensors for temperature, ground deformations, anomalies in gravity, geochemical activity, and more to monitor volcanic activity. The new innovation of sound wave detection through measurement of velocity of waves in the sea is also assisting in this early detection. Scientists say the key to survival of the imminent eruption is early detection and evacuation. 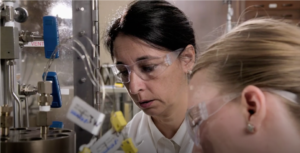