A recent Directindustry Magazine article highlighted an ambitious and exciting project from Airbus that would make it the first manufacturer to produce carbon-neutral jets by 2035.

Seemingly impossible only a few short years ago, commercial hydrogen-powered jets could take off in less than 15 years. Completing the project will require the investment of several tens of billions of euros and would give Airbus a significant lead over its American rival Boeing.

Unveiling the three hydrogen-power aircraft concepts at the center of the company’s “ZEROe” project last fall, Airbus CEO Guillaume Faury said, “The concepts offer the world a glimpse of our ambition to drive a bold vision for the future of zero-emission flight. I strongly believe that the use of hydrogen—both in synthetic fuels and as a primary power source for commercial aircraft—has the potential to significantly reduce aviation’s climate impact. This is a historic moment for the commercial aviation sector as a whole and we intend to play a leading role in the most important transition this industry has ever seen.”

According to the Airbus website, the three ZEROe concept aircraft enable the manufacturer to “explore a variety of configurations and hydrogen technologies that will shape the development” of their zero-emission aircraft. All three concepts are hybrid-hydrogen aircraft that are powered by hydrogen combustion through modified gas turbine engines. Liquid hydrogen is used as fuel for combustion with oxygen, and “hydrogen fuel cells create electrical power that complements the gas turbine, resulting in a highly efficient hybrid-electric propulsion system.”

The first concept is similar to Airbus’ A220 and A320 passenger jets. The conventional medium-haul twin-turbojet aircraft would carry 120 to 200 passengers and fly more than 3,500 kilometers. The jet would also be equipped with a hydrogen-powered fuel cell to “bring extra power to the engines when needed.” Two other possible models include a 100-seat jet with propellors for shorter flights and a flying wing with approximately 200 seats and a wider fuselage to accommodate hydrogen storage and distribution along with the passenger cabin.

The challenges ahead of such an ambitious program are many, particularly hydrogen storage and cost-effective hydrogen production from renewable energies. In addition, airports will need to prepare to handle hydrogen and build new transport and refueling infrastructure.

However, the benefits of overcoming these and other challenges to achieve carbon-neutral air travel would be transformational in helping to reduce the negative impact of commercial aviation on our climate.

Click here for information on Conax solutions that are paving the way for a new carbon-free future, including fittings, feedthroughs, sensors, and harness assemblies for generating, storing and transporting hydrogen. 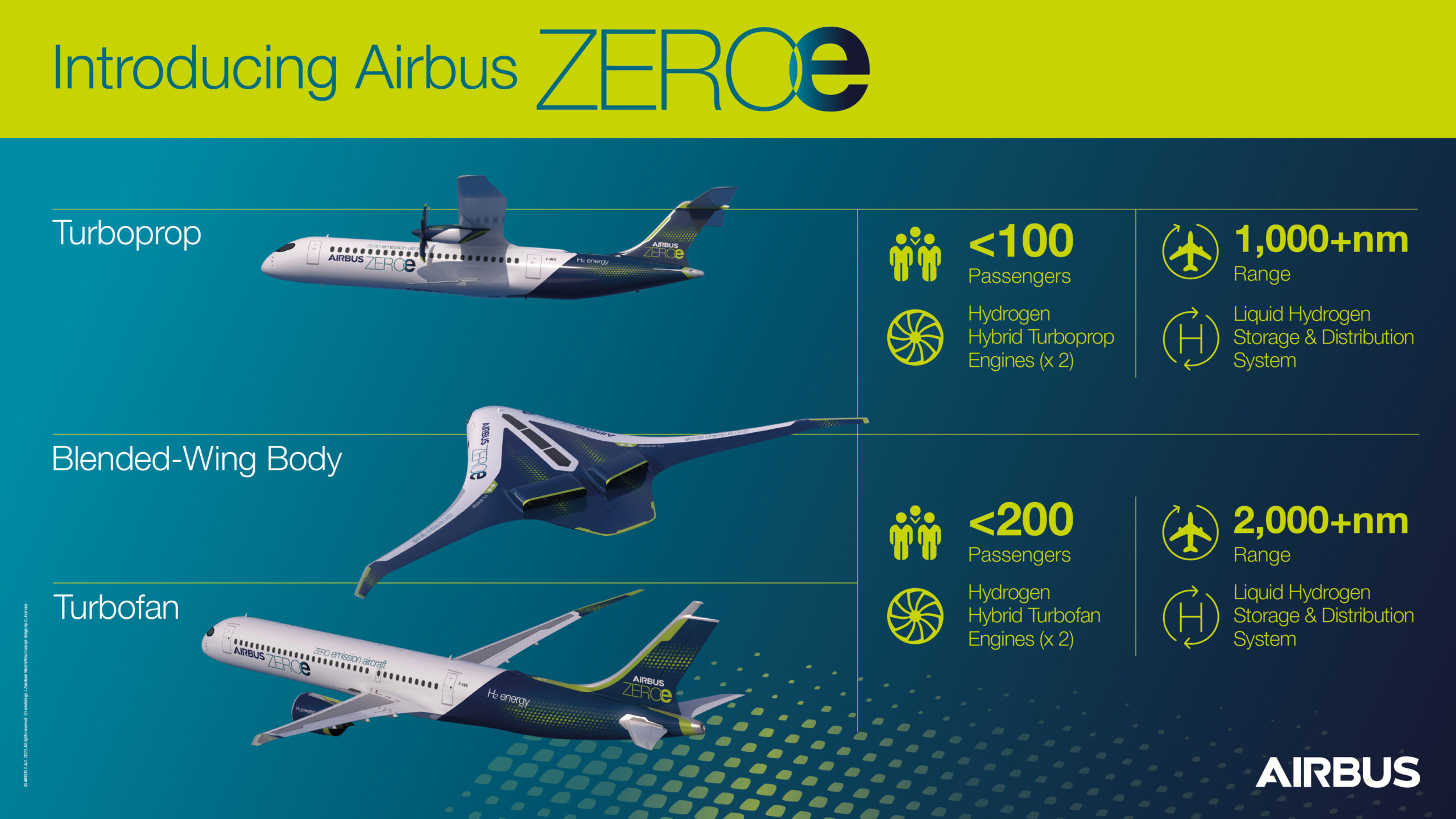 Discover the three zero-emission concept aircraft known as ZEROe in this infographic. These turbofan, turboprop, and blended-wing-body configurations are all hydrogen hybrid aircraft.