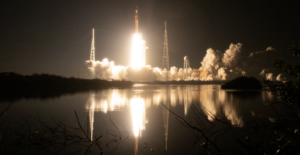 Conax continues its rich heritage in the aerospace industry

More than 60 years have passed since John Glenn became the first American to orbit the Earth as part of NASA’s Project Mercury. In 1962, parts that were designed and manufactured by Conax Technologies played an important role in Mercury’s success and established Conax as a key partner in the aerospace industry.

With the launch of Artemis 1 on November 16, 2022, Conax products are again playing a key role in our country’s space exploration. Components designed and manufactured by Conax were used on the Orion spacecraft, which will travel 1.3 million miles over 25 days orbiting the moon before its scheduled splashdown on December 11, 2022.

NASA named Conax Technologies as one of its Artemis Partners following its successful launch. Artemis 1’s unmanned Orion spacecraft is the first in a series of “increasingly complex missions” aimed at building “a long-term human presence at the Moon for decades to come.” Conax is extremely proud to partner with NASA on what is the first integrated test of NASA’s deep space exploration systems.

Visit our aerospace page for more details on Conax Technologies’ wide range of solutions and quality accreditations in the aerospace industry.